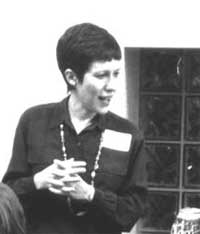 Rumour has it (see for example here or here)
that Carolyn Dean proved the Jacobian
conjecture in two variables!!!
Melvin Hochster seems to have
checked the proof and is convinced it is ok. Here is what he mailed to
seminar participants

The Jacobian conjecture
in the plane has been an open problem since 1939 (Keller). The simple
statement is this: given a ring map $F$ of $C[x,y]$ (the polynomial ring
in two variables over the complex numbers $C$) to itself that fixes $C $
and sends $x, y$ to $f, $g, respectively, $F$ is an automorphism if and
only if the Jacobian determinant $f_x g_y – f_y g_x$ is a nonzero
element of $C$. The condition is easliy seen to be necessary.
Sufficiency is the challenge.

Carolyn Dean has
proved the conjecture and will give a series of talks on it beginning
Thursday, December 2, 3-4 pm, continuing on December 9 and December 16.
Because there have been at least five published incorrect proofs and
innumerable incorrect attempts, any announcement of a proof tends to be
received with skepticism. I have spent approximately one hundred hours
(beginning in mid-August) checking every detail of the argument. It is
correct.

Many congratulations Carolyn and I hope to see you once
again somewhere, sometime.