In Belgium the hashtag-craze of the moment is #cestjoelle. Joelle Milquet is perceived to be the dark force behind everything, from the crisis in Greece, over DSK, to your mother-in-law coming over this weekend? #cestjoelle. 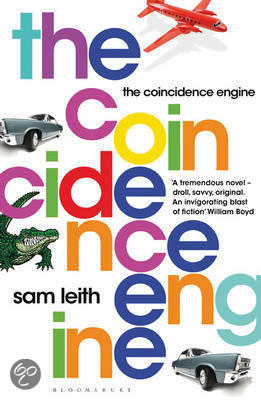 Sam Leith used the same meme in his book the coincidence engine.

A hurricane assembling a passenger jet out of old bean-cans? #cestGrothendieck

All shops in Alabama out of Chicken & Broccoli Rica-A-Roni? #cestGrothendieck

Frogs raining down on Atlanta? #cestGrothendieck

As this is a work of fiction, Alexandre Grothendieck‘s name is only mentioned in the ‘author’s note’:

“It is customary to announce on this page that all resemblances to characters living or dead are entirely coincidental. It seems only courteous to acknowledge, though, that in preparing the character of Nicolas Banacharski I was inspired by the true-life story of the eminent mathematician Alexandre Grothendieck.”

The name ‘Nicolas Banacharski’ is, of course, chosen on purpose (the old Bourbaki NB-joke even makes an appearance). The character ‘Isla Holderness’ is, of course, Leila Schneps, the ‘Banacharski ring’ is, of course, the Grothendieck circle. But, I’d love to know the name of the IRL-‘Fred Nieman’, who’s described as ‘an operative for the military’.

Sam Leith surely knows all the Grothendieck-trivia which shouldn’t come as a surprise because he wrote in 2004 a piece for the Spectator on the ‘what is a metre?’ incident (see also this n-category cafe post).

The story of ‘the coincidence engine’ is that Grothendieck did a double (or was it triple) bluff when he dropped out of academia in protest of military money accepted by the IHES. He went into hiding only to work for a weapons company and to develop a ‘coincidence bomb’. As more and more unlikely events happen during a car-ride by a young Cambridge postdoc though the US (to propose to his American girlfriend), the true Grothendieck-aficianado (and there are still plenty of them in certain circles) will no doubt begin to believe that the old genius succeeded (once again) and that Ana’s (Grothendieck’s mother) $\infty$-ring is this devilish (pun intended) device…

“There was no coincidence engine. Not in this world. It existed only in Banacharski’s imagination and in the imaginations he touched. But there was a world in which it worked, and this world was no further than a metre from our own. Its effect spilled across, like light through a lampshade.

And with that light there spilled, unappeased and peregrine, fragments of any number of versions of an old mathematician who had become his own ghost. Banacharski was neither quite alive nor quite dead, if you want the truth of it. He was a displaced person again, and nowhere was his home.”