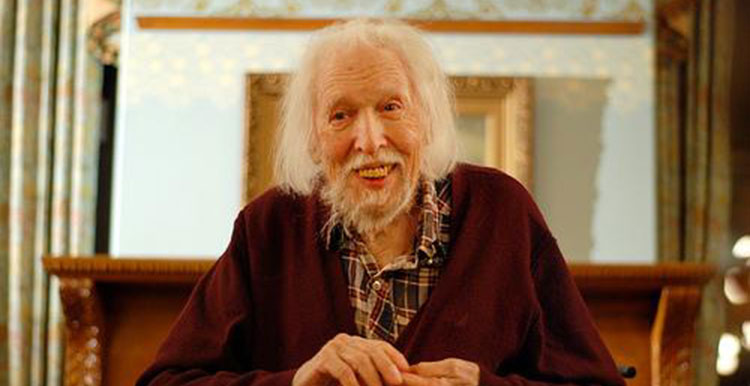 Knights and Knaves, the Heyting way

Smullyan’s Knights and Knaves problems are classics. On an island all inhabitants are either Knights (who only tell true things) and Knaves (who always lie). You have to determine their nature from a few statements. Here’s a very simple problem:

“Abercrombie met just two inhabitants, A and B. A made the following statement: “Both of us are Knaves.” What is A and what is B?”

Now, this one is simple enough to solve, but for more complicated problems a generic way to solve the puzzles is to use propositional calculas, as explained in Smullyan’s Logical Labyrinths”, chapter 8 “Liars, truth-tellers and propositional logic’.

If an inhabitants $A$ asserts a proposition $P$, and if $k_A$ is the assertion ‘$A$ is a Knight’, then the statement can be rephrased as

Usually, one can express $P$ as a propositional statement involving $k_A,k_B,k_C,\dots$.
The example above can be rephrased as

Clearly, one only requires this approach for far more difficult problems.

In almost all Smullyan puzzles, the only truth values are $0$ and $1$. There’s a short excursion to Boolean algebras (sorry, Boolean islands) in chapter 9 ‘Variable Liars’ in Logical Labyrinths. But then, the type of problems are about finding equivalent notions of Boolean algebras, rather that generalised Knights&Knaves puzzles.

Did anyone pursue the idea of Smullyanesque puzzles with truth values in a proper Heyting algebra?

I only found one blog-post on this: Non-Classical Knights and Knaves by Jason Rosenhouse.

He considers three valued logic (the Heyting algebra corresponding to the poset 0-N-1, and logical connectives as in the example on the Wiki-page on Heyting algebras.

On his island the natives cycle, repeatedly and unpredictably, between the two states. They are knights for a while, then they enter a transitional phase during which they are partly knight and partly knave, and then they emerge on the other side as knaves.

“If Joe is in the transitional phase, and you say, “Joe is a knight,” or “Joe is a knave,” what truth value should we assign to your statement? Since Joe is partly knight and partly knave, neither of the classical truth values seems appropriate. So we shall assign a third truth value, “N” to such statements. Think of N as standing for “neutral” or “neither true nor false.” On the island, vague statements are assigned the truth value N.

Just to be clear, it’s not just any statement that can be assigned the truth value N. It is only vague statements that receive that truth value, and for now our only examples of such statements are attributions of knight-hood and knave-hood to people in the transitional phase.

He gives one example of a possible problem:

Can you determine the types of all three people?”

If you know of more of these Smullanesque problems using Heyting algebras, please leave a comment. 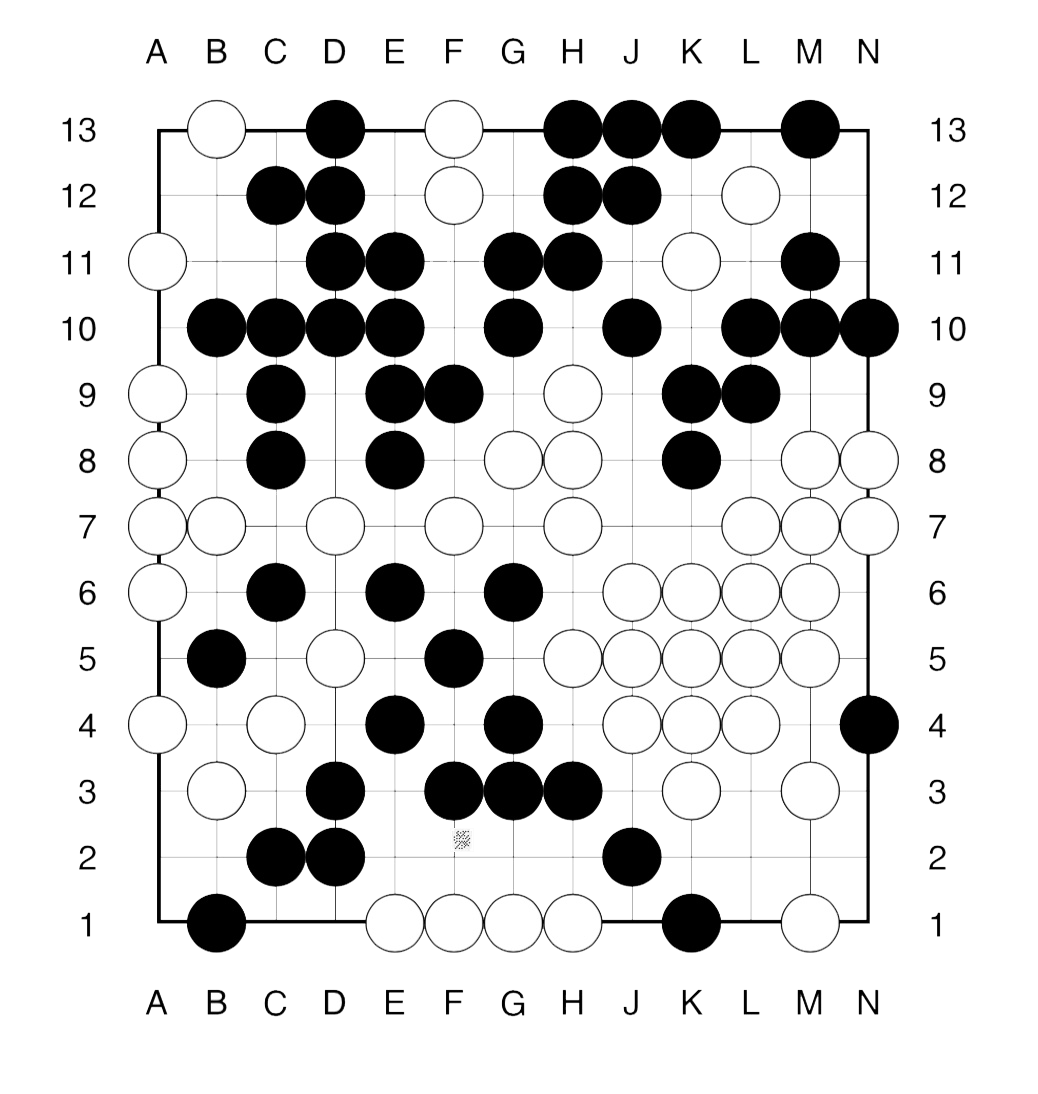 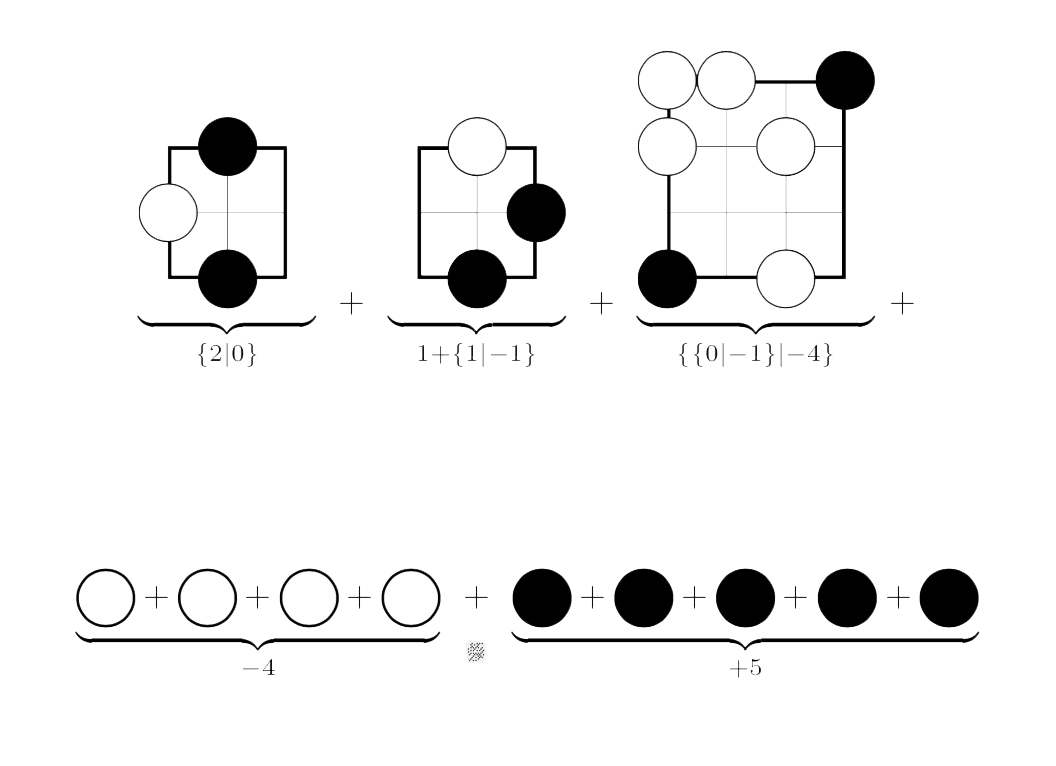 The two players, bLack (left) and white (right) take turns placing a stone of their colour on the board, but two stones of the same colour may not be next to each other.

The first player unable to make a legal move looses this game.

As is common in combinatorial game theory we do not specify which player has the move. There are $4$ different outcomes, the game is called:

Here’s an endgame problem: who wins this game? 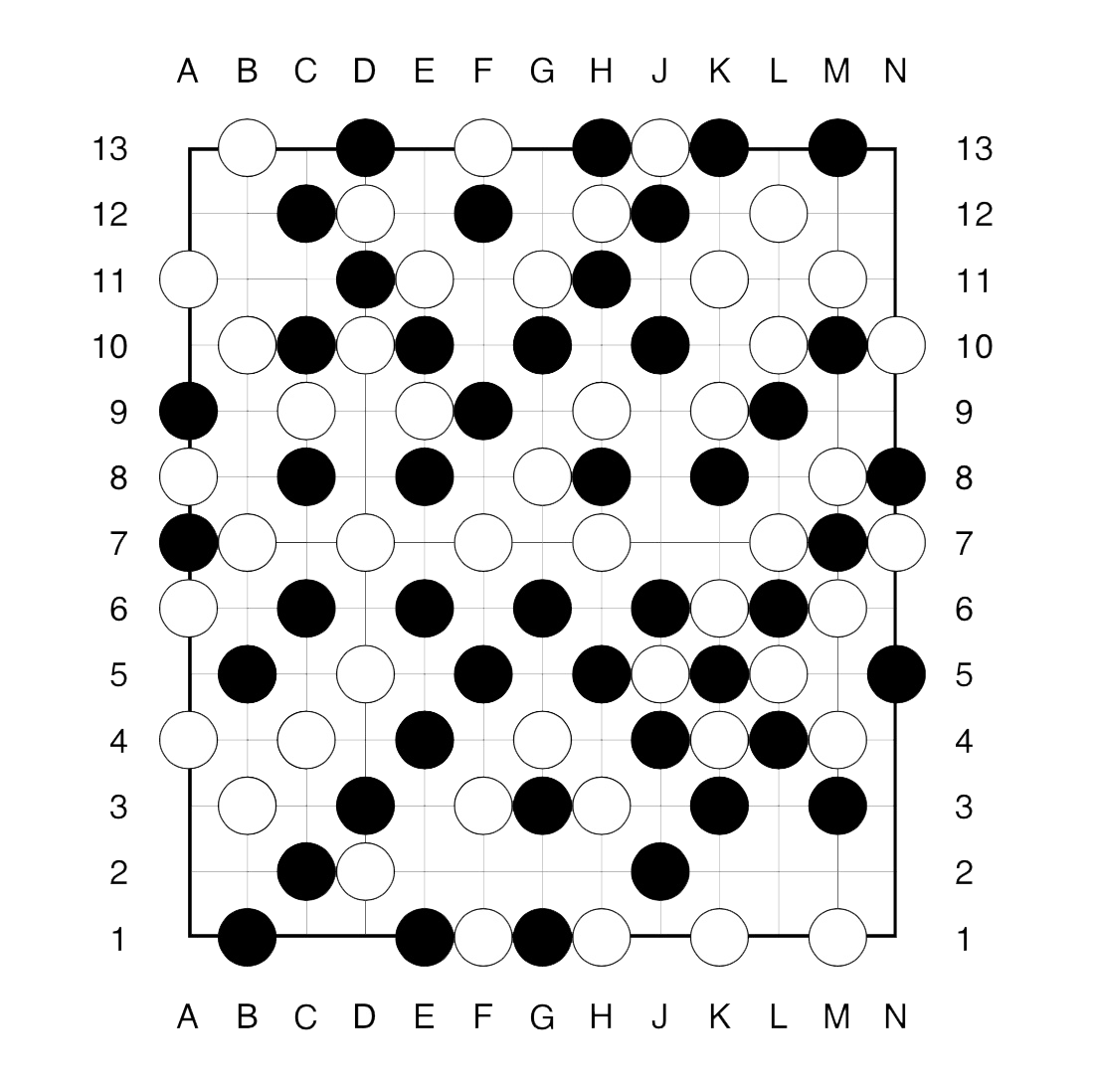 First we can exclude all spots which are dead, that is, are excluded for both players. Example, F11 is dead because it neighbors a black as well as a white stone, but F10 is alive as it can be played by white (Right).

If we remove all dead spots, we are left with 4 regions (the four extremal corners of the board) as well as 5 spots, 3 for white and 2 for black.

That is, the game reduces to this “sum”-game, in which a player chooses one of the regions and does a legal move in that component, or takes a stone of its own colour from the second row. 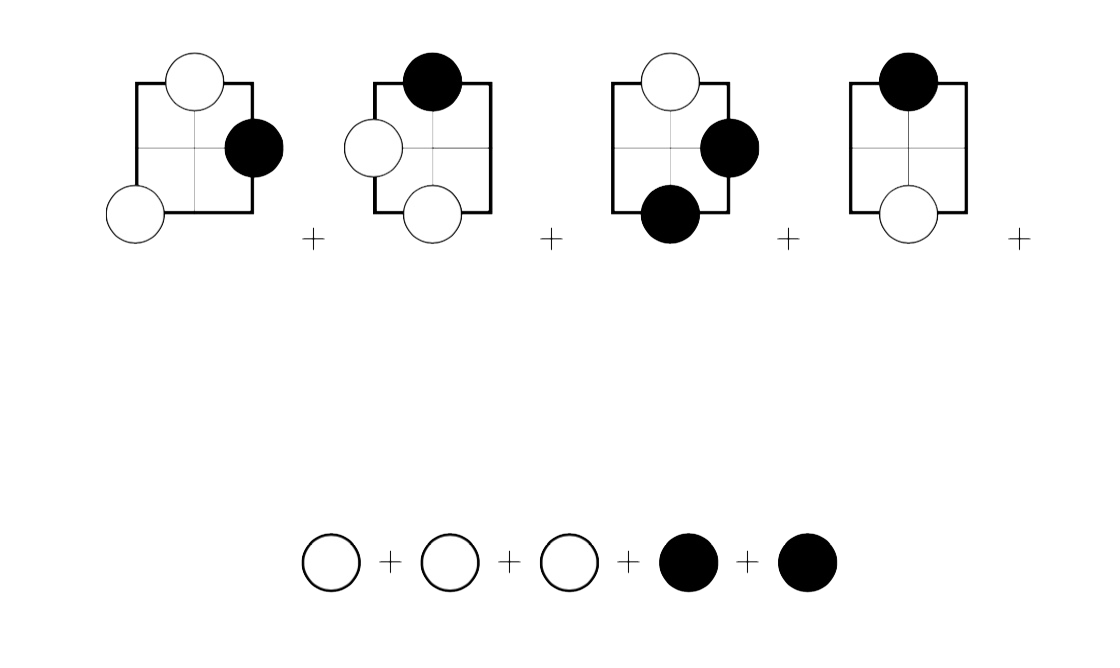 Next, we have to give a value to each of the region-games.

– the right-most game has value $0$ as the second player has a winning strategy by reflecting the first player’s move with respect to the central (dead) spot.

– the left-most game is equivalent to one black stone. Black can make two moves in the game, independent of the only move that white can make. So it has value $+1$.

– the sum-game of the two middle games has value zero. The second player can win by mirroring the first player’s move in the other component. This is called the Tweedledee-Tweedledum argument.

But then, the total value of the endgame position is 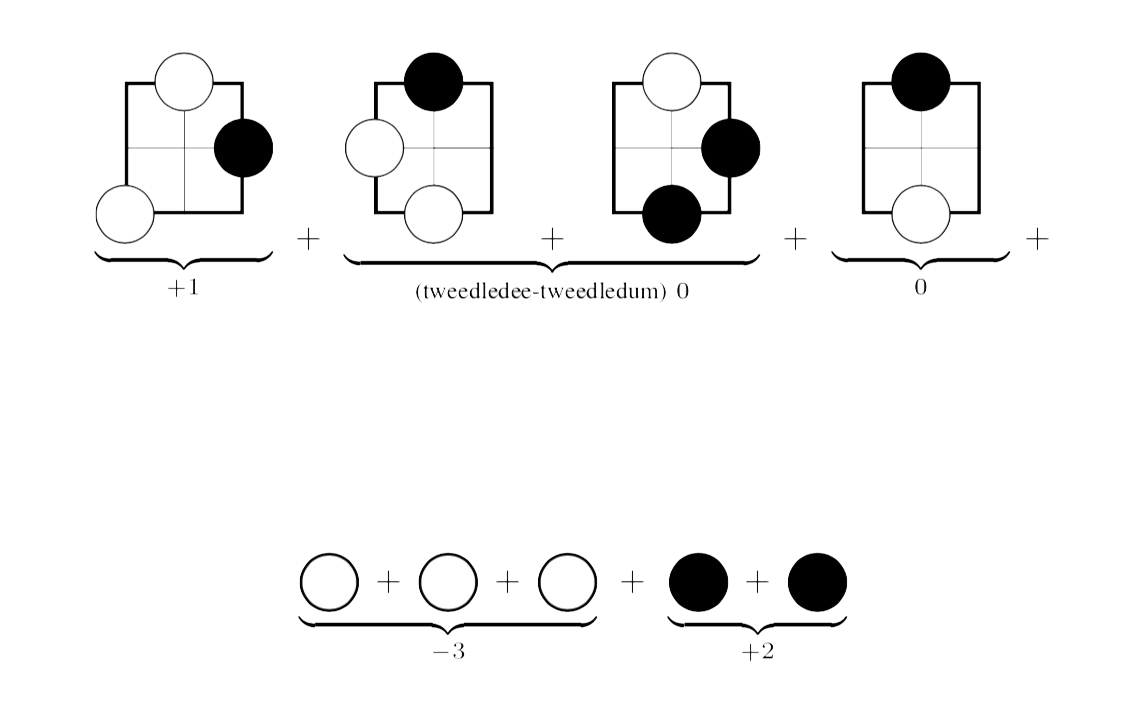 zero, so the first player to move looses the game!

Chomp and the moonshine thread

Chomp is a 2-player game, usually played with chocolate bars.

The players take turns in choosing one chocolate block and “eat it”, together with all other blocks that are below it and to its right. There is a catch: the top left block contains poison, so the first player forced to eat it dies, that is, looses the game.

If you start with a rectangular bar, the first player has a winning strategy, though it may take you too long to actually find the correct first move. See this post for the strategy-stealing argument.

This allows for higher dimensional versions of Chomp.

If you start with the set of all divisors of a given natural number $N$, then the strategy-stealing argument shows that the first player has a winning move.

A general position of the game corresponds to a finite set of integers, closed under taking divisors. At each move the player has to choose an element of this set and remove it as well as all its multiples.

But then, the union of all threads for all 171 moonshine groups is a position in higher dimensional Chomp.

Who wins starting from this moonshine thread?

Perhaps not terribly important, but it forces one to imagine the subgraph of the monstrous moonshine picture on the $97$ number-lattices way better than by its Hasse diagram.

By the way, notice the (slight) resemblance with the ‘monstrous moonshine painting’ by Atria

Here’s how the Hasse diagram of the moonshine thread was produced. These are ‘notes to self’, because I tend to forget such things quickly.

3. Copy the output to a file, say chomp.dot, and remove all new-line breaks from it.