One day (hopefully) lots of MP3, JPEG and perhaps even
MPEG-files will be flying around our wireless home-network. But I
didn’t have any idea of how much data I could cram through the
Airport-connections. To estimate the available bandwith of a
network there is a nice free tool around, iperf of which you can download binaries for
almost any platform including OS X. So click on the MacOS X (Darwin 6.4)
binary button half way on the iperf-page and you get a Desktop
iperf-1.7.0-powerpc-apple-darwin6.4 Folder which you may rename to
just iperf. Do this on two computers connected to the
Airport-network you want to measure. Now, decide which of the two will
play the ‘server’ and which the ‘client’ (the end result does not
depend on this choice). So fire up the Terminal of the serving
computer and type

and you will
get a message saying that the server is listening on TCP port 5001. Go
to the SystemPreferences/Network to obtain the IP-address of the server
(say it is 10.0.1.5) . Walk over to the ‘client’-computer and type
into its Terminal

and after a few moments it will compute the bandwidth of the
connection for you. Here is a sample output of two Airport-card
iMacs connected to the same Airport-Extreme base station :

However, if these two
AirportExtrame-card computers connect to each other via the
Graphite-Airport base station the bandwidth drops to a meagre 1.9
Mbits/sec which is roughly the same as two Airport-card computers
connecting (which gave me 2.45 Mbits/s). Anyway, there is no immediate
problem with bandwidth on either network for what I have in mind.
Another important number to know is the real speed of our
internet-connection (for instance if I want to replace our old router by
a better documented one and have a measure for the in/decrease of the
connection-speed). Here, a good URL is performance.chello.at which offers two tests :
String and String SSI. The later one has a graphical
resulting page such as 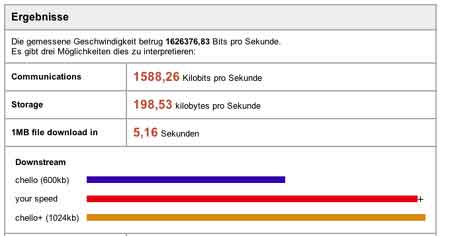