Ever since my accidental ‘discovery’ of the word CEILIDH written on a numb3rs blackboard, I keep an eye on their blackboards whenever I watch a new episode, and try to detect terms I might know. Here’s todays screen-shot 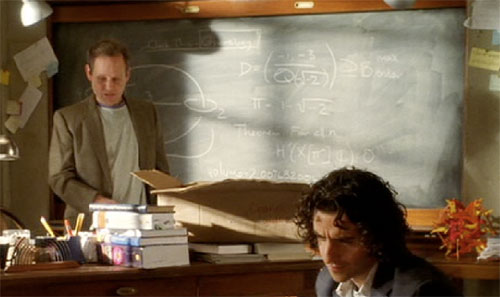 I had to choose one frame from a minute long shot (the ‘link’ on the left hand side is more recognizable in other frames). Anyway, here’s what I thought to recognize : a link, a quaternion-algebra over a number field,

$\begin{pmatrix} -1,-3 \\ \mathbb{Q}\sqrt{-2} \end{pmatrix} $ to be precise, and a $B^{max}_{order} $ in it. So did someone construct link-invariants from maximal orders in quaternion algebras? I surely didn’t know, but when in doubt there is always… google. I searched for ‘link invariant quaternion algebra maximal order’ and the third hit on page 2 gave me a pdf-file of a paper which seemed to have the relevant terms in it.

The paper is Automorphic forms and rational homology 3–spheres by Frank Calegari and Nathan Dunfield. Bingo! Their first figure is the ‘link’ drawn on the blackboard 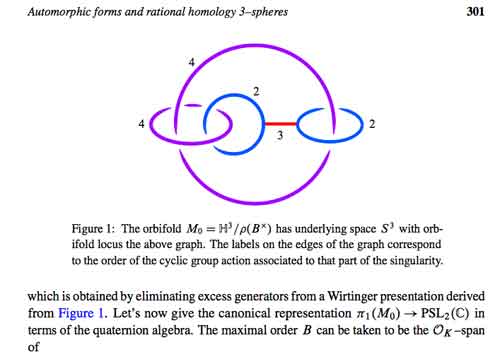 which actually turns out to be a graph… This couldn’t be a coincidence, so as in the ceilidh-story, there had to be a connection with one of the authors. ‘Calegari+numb3rs’ didnt look promising but ‘Dunfield+numb3rs’ returned the hit Crime and Computation from CalTech News.

Krumholtz’s star turn as a math genius belies his dismal record as an algebra student. He explained that in preparation for his role he hung around Caltech last fall, “wandering the hallways and campus for two to three weeks,” to soak up the academic ambiance. To plumb character motivation he talked to a real-life youthful math guy, Caltech’s 30-year-old professor Dunfield.

In a phone interview shortly after the show’s television debut Dunfield recalled spending about an hour with Krumholtz, who plays 29-year-old Charlie. “He wanted to know what it’s like to do mathematics and work in academia, what types of things his character would likely be concerned about, like tenure or other issues.”

The professor, who was so un-starstruck that he hadn’t even made a point of watching the premiere, added, “He wanted to know, why would somebody choose to become a mathematics professor. Would they have to love math?” What was his response? The professor said he does not recall.