This is how my attention was drawn to what I have since termed
anabelian algebraic geometry, whose starting point was exactly a study
(limited for the moment to characteristic zero) of the action of absolute
Galois groups (particularly the groups $Gal(\overline{K}/K) $, where K is an extension of finite type of the prime field) on (profinite) geometric fundamental
groups of algebraic varieties (defined over K), and more particularly (breaking with a well-established tradition) fundamental groups which are very far
from abelian groups (and which for this reason I call anabelian). Among
these groups, and very close to the group $\hat{\pi}_{0,3} $ , there is the profinite compactification of the modular group $SL_2(\mathbb{Z}) $, whose quotient by its centre
$\{ \pm 1 \} $ contains the former as congruence subgroup mod 2, and can also be
interpreted as an oriented cartographic group, namely the one classifying triangulated oriented maps (i.e. those whose faces are all triangles or
monogons). 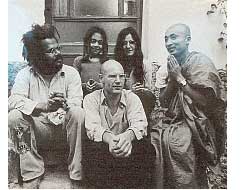 The above text is taken from Alexander Grothendieck‘s visionary text Sketch of a Programme. He was interested in the permutation representations of the modular group $\Gamma = PSL_2(\mathbb{Z}) $ as they correspond via Belyi-maps and his own notion of dessins d’enfants to smooth projective curves defined over $\overline{\mathbb{Q}} $. One can now study the action of the absolute Galois group $Gal(\overline{\mathbb{Q}}/\mathbb{Q}) $ on these curves and their associated dessins. Because every permutation representation of $\Gamma $ factors over a finite quotient this gives an action of the absolute Galois group as automorphisms on the profinite compactification

where the limit is taken over all finite index normal subgroups $N \triangleleft PSL_2(\mathbb{Z}) $. In this way one realizes the absolute Galois group as a subgroup of the outer automorphism group of the profinite group $\hat{\Gamma} $. As a profinite group is a compact topological group one should study its continuous finite dimensional representations which are precisely those factoring through a finite quotient. In the case of $\hat{\Gamma} $ the simple continuous representations $\mathbf{simp}_c~\hat{\Gamma} $ are precisely the components of the permutation representations of the modular group. So in a sense, anabelian geometry is the study of these continuous simples together wirth the action of the absolute Galois group on it.

In noncommutative geometry we are interested in a related representation theoretic problem. We would love to know the simple finite dimensional representations $\mathbf{simp}~\Gamma $ of the modular group as this would give us all simples of the three string braid group $B_3 $. So a natural question presents itself : how are these two ‘geometrical’ objects $\mathbf{simp}_c~\hat{\Gamma} $ (anabelian) and $\mathbf{simp}~\Gamma $ (noncommutative) related and can we use one to get information about the other?

This is all rather vague so far, so let us work out a trivial case to get some intuition. Consider the profinite completion of the infinite Abelian group

is the set of all roots of unity. On the other hand, the simple representations of $\mathbb{Z} $ are also one-dimensional and are determined by the image of the generator so

Clearly we have an embedding $\mu_{\infty} \subset \mathbb{C}^* $ and the roots of unity are even dense in the Zariski topology. This might look a bit strange at first because clearly all roots of unity lie on the unit circle which ‘should be’ their closure in the complex plane, but that’s because we have a real-analytic intuition. Remember that the Zariski topology of $\mathbb{C}^*$ is just the cofinite topology, so any closed set containing the infinitely many roots of unity should be the whole space!

Let me give a pedantic alternative proof of this (but one which makes it almost trivial that a similar result should be true for most profinite completions…). If $c $ is the generator of $\mathbb{Z} $ then the different conjugacy classes are precisely the singletons $c^n $. Now suppose that there is a polynomial $a_0+a_1x+\ldots+a_mx^m $ vanishing on all the continuous simples of $\hat{\mathbb{Z}} $ then this means that the dimensions of the character-spaces of all finite quotients $\mathbb{Z}/n\mathbb{Z} $ should be bounded by $m $ (for consider $x $ as the character of $c $), which is clearly absurd.

Hence, whenever we have a finitely generated group $G $ for which there is no bound on the number of irreducibles for finite quotients, then morally the continuous simple space for the profinite completion

should be dense in the Zariski topology on the noncommutative space of simple finite dimensional representations of $G $. In particular, this should be the case for the modular group $PSL_2(\mathbb{Z}) $.

There is just one tiny problem : unlike the case of $\mathbb{Z} $ for which this space is an ordinary (ie. commutative) affine variety $\mathbb{C}^* $, what do we mean by the “Zariski topology” on the noncommutative space $\mathbf{simp}~PSL_2(\mathbb{Z}) $ ? Next time we will clarify what this might be and show that indeed in this case the subset

will be a Zariski closed subset!