A *qurve*
is an affine algebra such that $~\Omega^1~A$ is a projective
$~A~$-bimodule. Alternatively, it is an affine algebra allowing lifts of
algebra morphisms through nilpotent ideals and as such it is the ‘right’
noncommutative generalization of Grothendieck’s smoothness criterium.
Examples of qurves include : semi-simple algebras, coordinate rings of
affine smooth curves, hereditary orders over curves, group algebras of
virtually free groups, path algebras of quivers etc.

Hence, qurves
behave a lot like curves and as such one might hope to obtain one day a
‘birational’ classification of them, if we only knew what we mean
by this. Whereas the etale classification of them is understood (see for
example One quiver to
rule them all or Qurves and quivers )
we don’t know what the Zariski topology of a qurve might be.

Usually, one assigns to a qurve $~A~$ the Abelian category of all its
finite dimensional representations $\mathbf{rep}~A$ and we would like to
equip this set with a topology of sorts. Because $~A~$ is a qurve, its
scheme of n-dimensional representations $\mathbf{rep}_n~A$ is a smooth
affine variety for each n, so clearly $\mathbf{rep}~A$ being the disjoint
union of these acquires a trivial but nice commutative topology.
However, we would like open sets to hit several of the components
$\mathbf{rep}_n~A$ thereby ‘connecting’ them to form a noncommutative
topological space associated to $~A~$.

In a noncommutative topology on
rep A I proposed a way to do this and though the main idea remains a
good one, I’ll ammend the construction next time. Whereas we don’t know
of a topology on the whole of $\mathbf{rep}~A$, there is an obvious
ordinary topology on the subset $\mathbf{simp}~A$ of all simple finite
dimensional representations, namely the induced topology of the Zariski
topology on $~\mathbf{spec}~A$, the prime spectrum of twosided prime ideals
of $~A~$. As in commutative algebraic geometry the closed subsets of the
prime spectrum consist of all prime ideals containing a given twosided
ideal. A typical open subset of the induced topology on $\mathbf{simp}~A$
hits many of the components $\mathbf{rep}_n~A$, but how can we extend it to
a topology on the whole of the category $\mathbf{rep}~A$ ?

Every
finite dimensional representation has (usually several) Jordan-Holder
filtrations with simple successive quotients, so a natural idea is to
use these filtrations to extend the topology on the simples to all
representations by restricting the top (or bottom) of the Jordan-Holder
sequence. Let W be the set of all words w such as $U_1U_2 \ldots U_k$
where each $U_i$ is an open subset of $\mathbf{simp}~A$. We can now define
the *left basic open set* $\mathcal{O}_w^l$ consisting of all finite
dimensional representations M having a Jordan-Holder sequence such that
the i-th simple factor (counted from the bottom) belongs to $U_i$.
(Similarly, we can define a *right basic open set* by counting from the
top or a *symmetric basic open set* by merely requiring that the simples
appear in order in the sequence). One final technical (but important)
detail is that we should really consider equivalence classes of left
basic opens. If w and w’ are two words we will denote by $\mathbf{rep}(w
\cup w’)$ the set of all finite dimensional representations having a
Jordan-Holder filtration with enough simple factors to have one for each
letter in w and w’. We then define $\mathcal{O}^l_w \equiv
\mathcal{O}^l_{w’}$ iff $\mathcal{O}^l_w \cap \mathbf{rep}(w \cup w’) =
\mathcal{O}^l_{w’} \cap \mathbf{rep}(w \cup w’)$. Equivalence classes of
these left basic opens form a partially ordered set (induced by
set-theoretic inclusion) with a unique minimal element 0 (the empty set
corresponding to the empty word) and a uunique maximal element 1 (the
set $\mathbf{rep}~A$ corresponding to the letter $w=\mathbf{simp}~A$).
Set-theoretic union induces an operation $\vee$ and the operation
$~\wedge$ is induced by concatenation of words, that is,
$\mathcal{O}^l_w \wedge \mathcal{O}^l_{w’} \equiv \mathcal{O}^l_{ww’}$.
This then defines a **left noncommutative topology** on $\mathbf{rep}~A$ in
the sense of Van Oystaeyen (see [part
1](http://www.neverendingbooks.org/index.php/noncommutative-topology-1 $
). To be precise, it satisfies the axioms in the left and middle column
of the following picture 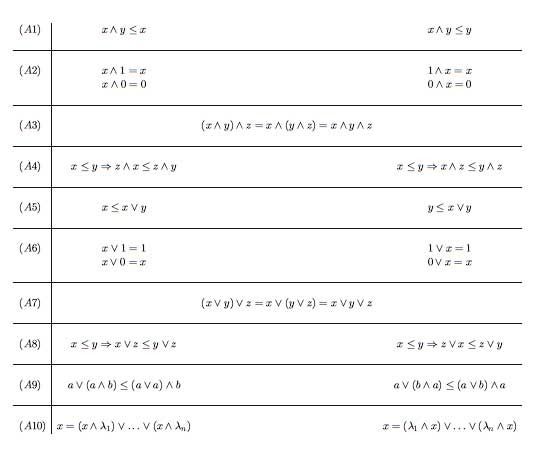 and
similarly, the right basic opens give a right noncommutative topology
(satisfying the axioms of the middle and right columns) whereas the
symmetric opens satisfy all axioms giving the basis of a noncommutative
topology. Even for very simple finite dimensional qurves such as
$\begin{bmatrix} \mathbb{C} & \mathbb{C} \\ 0 & \mathbb{C}
\end{bmatrix}$ this defines a properly noncommutative topology on the
Abelian category of all finite dimensional representations which
obviously respect isomorphisms so is really a noncommutative topology on
the orbits. Still, while this may give a satisfactory local definition,
in gluing qurves together one would like to relax simple representations
to *Schurian* representations. This can be done but one has to replace
the topology coming from the Zariski topology on the prime spectrum by
the partial ordering on the *bricks* of the qurve, but that will have to
wait until next time…