2005
was the year that the DaVinci code craze hit Belgium. (I started reading Dan Brown’s
Digital Fortress and Angels and Demons a year
before on the way back from a Warwick conference and when I read DVC a
few months later it was an anti-climax…). Anyway, what better way
to end 2005 than with a fitting chess problem, composed by Noam Elkies 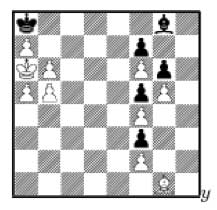 The problem is to give an infinite sequence
of numbers, the n-th term of the sequence being the number of ways White
can force checkmate in exactly n moves. With the DVC-hint given, clearly
only one series can be the solution… To prove it, note that
White’s only non-checkmating moves are with the Bishop traveling
along the path (g1,h2,g3,h4) and use symmetry to prove that the number
of paths of length exactly k starting from h2 is the same as those
starting from g3…

If that one was too easy for you,
consider the same problem for the position 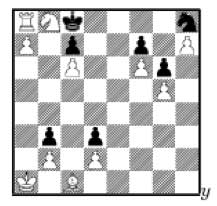 Here the solution are the 2-powers of those
of the first problem. The proof essentially is that White has now two
ways to deliver checkmate : Na6 and Nd7… For the solutions and
more interesting chess-problems consult Noam Elkies’ excellent
paper New directions in
enumerative chess problems. Remains the problem which sequences can
arise on an $N \\times N$ board with an infinite supply of chess
pieces!